The Rainbow Falls Trail to Mount LeConte is a challenging 13.8 mile hike with a total elevation gain of 3,993 feet. Hikers report that the beautiful Rainbow Falls, lush vegatation, and amazing scenery make the difficult hike well worth it. Since both trails share a common parking lot, this beautiful trail can be combined with the Bull Head Trail for a fantastic loop hike.

Rainbow Falls Trail to Mount Leconte Overview
Rainbow Falls Trail is a popular, but challenging trail that ascends Mount LeConte, passing by the highest single-drop waterfall in the Smoky Mountains. The Rainbow Falls Trail is not for the faint of heart. It has a total elevation gain from trailhead to summit of nearly 4,000 feet and covers a whopping 13.8 miles roundtrip. In the first 2.3 miles alone, the trail gains more than 1,500 feet.

Parking and Trailhead
The Rainbow Falls Trail is just a short jaunt from Gatlinburg and a great day trip for tourists and locals alike. From the #8 traffic light, follow along Airport Road and begin traveling out of Gatlinburg toward the Great Smoky Mountains National Park. The road will veer into Cherokee Orchard Road at the park entrance. Plan to travel approximately 2.5 miles before coming upon the Rainbow Falls Trailhead parking area, which will be clearly marked to the right. This is a popular trail, so the parking lot may fill up quickly during nice weather or on weekends. Note that there is additional parking 0.1 miles past the primary lot. Look for the Rainbow Falls trailhead at the southeast corner of the parking area. Turning Around at Rainbow Falls vs. Hiking to Mount LeConte Summit
Your time on the trail will depend on your pace and turnaround point. We recommend hiking to the Rainbow Falls waterfall at a minimum, which is approximately 2.7 miles from the trailhead. Most can make this climb and return trip in under 5 hours — many as little as 3. Since the rocky terrain and significant elevation gain make this trail moderately strenuous to difficult, a few hours may be just enough to enjoy nature, torch some calories and work up an appetite for a hearty lunch. This review of the shorter round-trip to the falls is perfect if you aren’t wanting to hike all the way to the summit. A full summit trip is much longer and can take up to 10 hours to hike. If you plan to reach the peak, we recommend starting your hike early in the day to allow plenty of time to return before dark. Trail Experience
The Rainbow Falls Trail is minimally exposed compared to other trails. Instead, this trail is shrouded by lush forests and plenty of opportunities to view natural wildlife in the area. For the first half-mile, you’ll notice LeConte Creek to the right. The trail then crosses three bridges before delivering you to the base of Rainbow Falls.

At 80-feet tall, Rainbow Falls gets its name from the colorful rainbow that often forms in the mist on clear, sunny days when the light hits the falls in just the right way. The falls are visible from the trail, but you will have to navigate through dense trees to get an up-close view of the drop pool. Keep in mind that the rocks near the falls are slippery, and the area should be approached with caution.

For the majority of hikers, the falls are the reward of the hike, and serve as the turnaround point. On the other hand, we are fans of the loop-hike via Bull Head Trail. Rainbow Falls Trail shares a parking lot with the Bull Head Trail and intersects it approximately 6 miles from the trailhead — another 1,700-foot climb from the falls. If you have the gusto, we suggest taking Bull Head Trail on your descent. It is approximately half a mile longer than the Rainbow Falls Trail, but it compensates with spectacular views and panoramic vistas. Pressing on to Mount LeConte
You may find yourself itching to reach the summit of Mount LeConte and we don’t blame you one bit!. Mount LeConte rewards eager hikers with impressive views of the surrounding mountains and National Park that can only be seen at higher elevations. The mountain is crossed by several trails, many of which intersect each other at various junctions. To reach the summit, which can be found approximately 4 miles past Rainbow Falls, you will also hike a small part of the Bull Head Trail and Alum Cave Trail. Approximately six miles from the Rainbow Falls trailhead,  swing left at the Bull Head Trail junction. Continue on Alum Cave Trail for less than a half-mile, and then veer left along the Trillium Gap Trail to reach the summit approximately 6.9 miles from the trailhead. Mount LeConte is the third highest peak in the Smokies. It reaches a staggering 6,593 feet and is home to the only private lodging in the Great Smoky Mountains National Park: LeConte Lodge. There is much debate over the history of Mount LeConte and who it was named after. Officially, the U.S. Geological Survey recognizes Joseph LeConte as its namesake, a famous geologist and founding member of the Sierra Club. Other sources, however, name John LeConte — Joseph’s brother — as the namesake. John, too, was highly successful. He was well-known for his scientific work and time served as president of the University of California at Berkley. 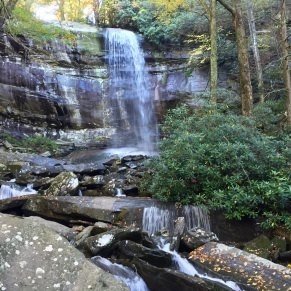 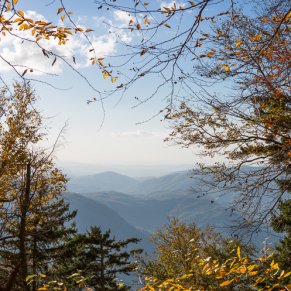 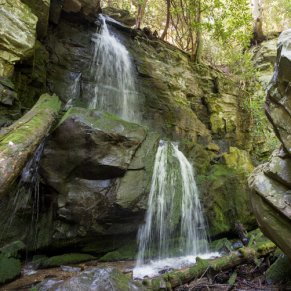